Project development of the vibro absorbation

Nowadays the new buildings and constructions are built on the plots influenced by the vibrations more and more often, including the right of ways of the underground or the railway. The named sources of the vibration can cause the vibrations of the elements of the construction of the building, which are much higher than the levels allowed for a human being. The protection zone of the railway is 100 m, and the protection zone of the tram line, as the measurements show, reach 60 m from the side rail. Together with this, those plots, located in the downtowns of the big cities, arise a high interest among the investors, who are ready to invest money into the new construction and, correspondently, to the arrangements of the vibro absorbing of the buildings raised.

Also, while the road and transport network of the big city grows and develops, new underground lines of shallow bedding are developed under the built houses and constructions, which also requires the arrangements on the vibration protection. In cases like those it is reasonable to decrease the vibration in its "source" directly, and we develop the arrangements on the vibro absorption of the new rail ways or improve it at the reconstruction of the existing ones.

The arrangements on the vibro absorption of the engineering systems and communication systems of a modern building need a special attention of our engineers. First of all, these are the ventilation and conditioning systems, heating and water supply, elevators and energy supply. The more modern and comfortable the building or the construction is, the more similar engineering systems and communications connecting them it has. Without arranging special protection arrangements the vibrations appearing at the operation of their power generators may be transferred to the load carrying structure of the building and spread to large distances without any considerable attenuation, raising the so called secondary airborne noise. 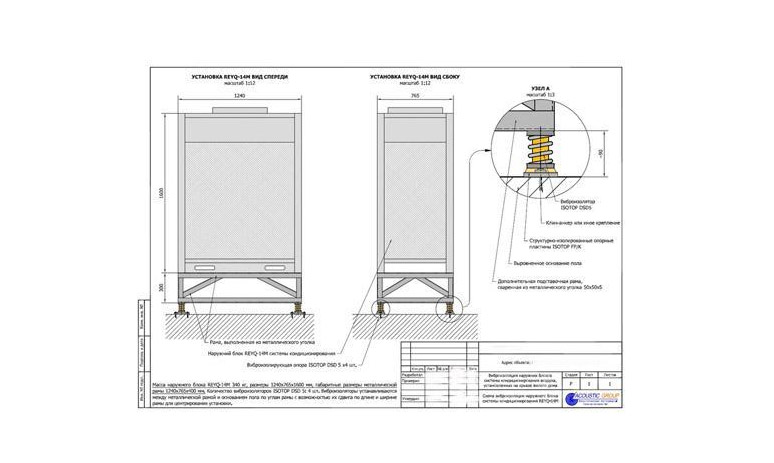 A Fragment of the acoustic project. Solution of the vibro absorption